In addition, a new video from YouTuber Promobricks has now revealed what could be new LEGO Harry Potter sets for summer 2023, However, do note that the LEGO Group has yet to confirm any of the models mentioned below, so do treat this information with caution for now.

First up is 76414 Expecto Patronum, which is believed to contain 754 pieces and may retail for £64.99. This potentially sounds like an updated version of 2019's 75945 Expecto Patronum, although the increased piece count for this version is certainly worth noting. Up next is 76415 The Battle of Hogwarts, rumoured to be priced at £84.99, with 730 pieces in the set.

Promobricks speculates this might be a Harry Potter and the Deathly Hallows-based build, although that's just wishful thinking on the part of the YouTuber. 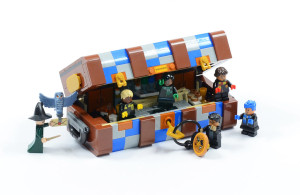 The third model discussed in the video is 76416 Quidditch Trunk, said to contain 599 pieces and retailing for £64.99. It's possible the build could open up and feature a playset interior with minifigures, similar to 76399 Hogwarts Magical Trunk, but that's just guesswork on our part. One of the most highly-anticipated and rumoured sets for LEGO Harry Potter fans is the direct-to-consumer model, 76417 Gringotts Bank.

Said to be priced at £429.99, the potential high cost of the build suggests a very detailed and large model (although no piece count has been revealed) that might be compatible with 75978 Daigon Alley. Promobricks proposes that a model of a dragon could possibly be included with set, as well as a rail cart track and a Gringotts Bank Safe GWP at some point. 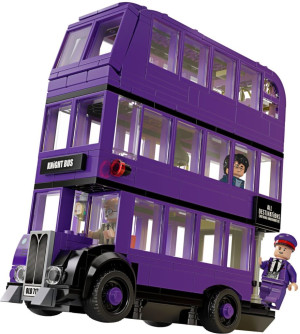 Later in the year might see the arrival of 76418 Advent Calendar, with the seasonal LEGO Harry Potter set said to be coming in at £44.99 and including 227 pieces. Also due in 2023 is said to be another D2C build, with 76419 The Knight Bus clocking in at a whopping 2,260 pieces. An updated version of the retired 75957 The Knight Bus, the new set could possibly be opened up and expanded, echoing the movie version of the magical vehicle.

76421 Dobby the House Elf is also reported to be arriving this summer, with 403 pieces and retailing for £39.99. A potential brick-built version of the character could be similar to 76217 I am Groot and is said to include his sock and cake accessories. Speaking of character figures, we may also get to see 40616 Harry Potter & Cho Chang, 40617 Draco Malfoy & Cedric Diggory and 40618 Kingsley Shacklebolt BrickHeadz models in the coming months, with the former two priced at £19.99 and the latter at £9.99.

Every LEGO Harry Potter sets rumoured and confirmed for 2023

Support the work that Brick Fanatics does by purchasing your LEGO sets using our affiliate links, and read more about the wider issues surrounding LEGO Harry Potter.