The LEGO Group has revealed three different concepts the design team originally pitched for the upcoming BIONICLE gift-with-purchase, 40581 BIONICLE Tahu & Takua. BIONICLE is officially back in the nostalgic GWP 40581 BIONICLE Tahu & Takua, which will be free with orders above GBP90 / £100 / EUR100 from January 27. The 219-piece build offers a route back into the constraction theme through a System lens, with small brick-built figures of two of its most iconic characters, Tahu and Takua.

That pairing wasn't the only concept on the table for this retro freebie, though. LEGO designers Nick Vas and Niek van Slagmaat have shared images of a trio of concepts that were sent to the LEGO gift-with-purchase team for review, and they each offer a different entry point into the world of BIONICLE - but still within a limited budget.

"I was trying to pitch as small as possible, because the bigger the gift-with-purchase would be the cooler it could be, but at the same time, it would have a higher purchase threshold to be able to get this thing," Vas explains. "I had no idea what [the threshold] would be because I was just making the product and not really asking too many questions, [but I was] trying to make something really cool and as effective as possible within a small package. "The original BIONICLE sets were also quite small too, so it feels like we shouldn't be doing a massive thing, even though we can go quite big today." Check out all three concepts for that smaller BIONICLE freebie below.

The first concept pitched was the one ultimately chosen, of two small buildable figures of a Toa and Matoran from BIONICLE's original run.

Tahu is obviously the most recognisable of those two characters, as the face of the original BIONICLE wave - and the designers confirmed Takua's presence is intended specifically for dedicated BIONICLE fans. "Your task is to make something that would be recognisable to non-hardcore BIONICLE fans," Slaagmat says, "and then including Takua in there is an extra for people that specifically are the deeper lore fans, because Takua is just generally a very-well-loved character." 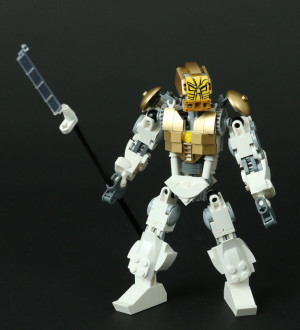 The next pitch for 40581 BIONICLE Tahu & Takua took a second character out of the equation, and instead focused entirely on Takanuva, the Toa of Light. "We were just putting all that [budget] into one figure to see, 'Well, how could we make an articulated figure using System pieces?'" Vas explains. "This is definitely pushing the limit of what can be done - it could be a possibility, but it was working up against limitations."

Those limitations include the number of new, printed or recoloured elements: for 40581 BIONICLE Tahu & Takua, Vas had just two to work with. Takanuva was on the edge of possibility thanks to the character's colour scheme, but starting in this format would potentially have closed the doors on further Toa (including building your own at home). "We have to work within all the colours that happen to be available," Vas adds. "Takanuva is a great option, because white is generally quite versatile.

But some of the other characters in unusual colours will be harder to do authentically, without the full budget to make lots of other changes."

The third and final pitch managed to get all six original Toa Mata - Tahu, Kopaka, Pohatu, Lewa, Onewa and Gali - into a single box, albeit at a heavily-reduced scale. "I think we explored versions with stickers for faces - these are brick-built ones where it's super minimal and abstract," Vas says. "[We asked] how well can you capture the expression of the Toa Mata team? Because that is also an iconic thing.

But it means that they're all quite small. There's a neat style that came out of that in the end. I think George Gilliatt made these ones."

"It was very much a desk toy direction, where you can take your favourite one to work - that kind of thing," adds Slagmaat.

Ultimately, only one of these concepts could make the cut. "We shared [all three] with the gift-with-purchase team and said, 'Would you be interested in any of these directions?'" Vas recalls. "Which is really for me a no-lose scenario, because all of them are BIONICLE. And they said yes to Tahu and Takua."