Now that we've had some time to examine LEGO Ideas 21338 A-Frame Cabin in more detail, here are a few charming details we spotted. 21338 A-Frame Cabin is a visual delight from top to beginning, with a warm autumnal colour scheme and rustic details throughout. The four minifigures have plenty of cosy nooks and relaxing activities to take part in, whether that's taking pictures of the forest around them with a brick-built camera or paddling through the trees in a canoe last seen in 10291 The Friends Apartment.

Here are a few more of our favourite details that caught our eye.

21338 A-Frame Cabin includes a reference to another LEGO Ideas set in the form of a typewriter. To some, it may seem like a new part, but it's been used in two of the most recent Modular Buildings, 10278 Police Station and 10297 Boutique Hotel. It adds to the timeless feel of the home, which doesn't have many modern appliances to speak of. 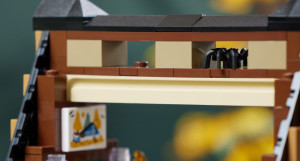 For the eagle-eyed among you, you might have already spotted that there aren't just creatures outside the house, but also inside.

Tucked away in the A-frame of the building itself is a tiny spider, making a home for itself in the attic. You could easily add extra authenticity to your cabin by adding some cobwebs to the roof, spun by this uninvited guest. 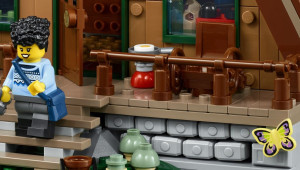 Instead of the usual brick piece we often see in stone walls, 21338 A-Frame Cabin's stone wall at the front is made from the same element as Thor's hammer. This leaves some space in between each piece, giving it a proper cobbled effect, in keeping with the rustic appearance of the cabin throughout. 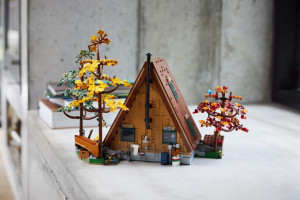 The best LEGO sets are the ones that pay attention to every last detail, making it seem believable that the minifigures could actually live in the brick-built structures. 21338 A-Frame Cabin certainly achieves that, with a chimney that gives the illusion of connecting to the cooker in the kitchen.

Plus, the rear of the building also has a boiler and what looks like a waste tank, meaning the home is self-sufficient in its remote forest location. 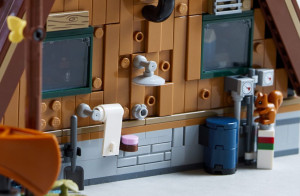 In the same vein, you might have noticed there's no bathroom inside. That's because there's a roll of toilet roll and outdoor shower at the back of the building, meaning you can shower and do your business while looking out at the wilderness. Keep this cabin well away from your other Modular Buildings, otherwise some of them might get an eyeful of their neighbours!

Keep an eye out for our in-depth review coming soon, where we'll dig into the latest LEGO Ideas set in more detail.