An early review of 40622 Disney 100th has highlighted a mixed aspect of the models while showcasing a unique side to the figures.  As the first of the LEGO Group's Disney 100th anniversary celebrations, 40622 Disney 100th Celebration changes up one of the more familiar elements of BrickHeadz with the bases for each of the four caricatures.

Showcased by Brickset, a collection of drum-lacquered silver elements replaces some of the black bricks that makes up the BrickHeadz face pattern on the base of each figure. However, a grey piece or two on each of the four bases is not drum-lacquered. 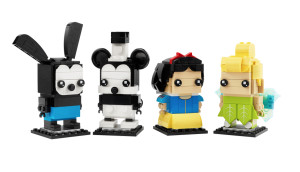 While unfortunate when looking directly at the bases, official images showcase that you can't easily see these grey pieces when the figures are on display, especially in Snow White's caricature.

Support the work that Brick Fanatics does by buying your LEGO Disney sets using our affiliate links.