Another way to build a purple LEGO Classic Space astronaut

An upcoming LEGO City set will offer another (and potentially cheaper) way to build a purple Classic Space astronaut. When images of 80111 Lunar New Year Parade first arrived online in November 2022, the first thing that caught the eye of many a LEGO Classic Space fan was the presence of a purple helmet and airtanks, both available in that colourway for the very first time. The Lunar New Year 2023 set is now available to purchase, allowing Classic Space veterans to finally complete a proper purple astronaut.

That's not the only route to adding to your LEGO Classic Space collection, though: this year's 60361 Ultimate Stunt Riders Challenge will also include the purple airtanks, offering another opportunity to pick up the coveted element. You'll still need to grab 80111 Lunar New Year Parade for the correct style of helmet, but if you're satisfied with the standard helmet used for the green astronauts in 21109 Exo Suit, the LEGO City set should offer a cheaper way to complete your minifigure.

60361 Ultimate Stunt Riders Challenge already retails for GBP10 / £30 / EUR10 less than 80111 Lunar New Year Parade, but LEGO City Stuntz sets are typically discounted by as much as 50% through third-party retailers. That means you'll hopefully be able to feel better about buying an entire set for one piece - if those same purple airtanks don't show up through the LEGO Group's Pick a Brick service, which is also a distinct possibility, and one perhaps strengthened by the presence of the piece in a second set.

The rest of the pieces needed to assemble a purple Classic Space astronaut do already exist, but they don't come off the shelf in the same way as the brown astronaut in 71037 Series 24.

As documented in our original guide to building a purple LEGO Classic Space minifigure, the torso debuted with 71032 Series 22's Space Creature, but you'll need to swap out the arms, legs, hips and hands for all-purple alternatives.

You can find more Classic Space astronauts in 10497 Galaxy Explorer and 71037 Series 24, both of which are also out now. 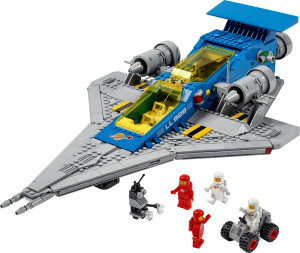