This issue of the magazine could be perfect for those hoping to build an army of 212th Clone Trooper minifigures with amassing a huge number of AT-TEs too.

The post does not state which issue of the LEGO Star Wars Magazine this image could be from but does mention it being the next issue. At the time of writing, issue 91 is now available with a preview of the gift in issue 92 showcasing Bo-Katan Kryze exclusively from 75316 Mandalorian Starfighter. 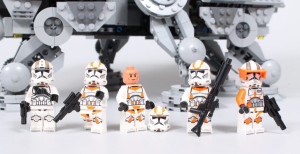 Since the image does not include Bo-Katan, it suggests that the post is referring to issue 93, available from February 25 in some regions.  While the LEGO Star Wars Magazine is limited to the UK and a handful of European countries, the easy access to this minifigure may be another sign of the issues affecting the Star Wars minifigure aftermarket.

In case you need a vehicle to go with your 212th Clone Trooper minifigures, 75337 AT-TE Walker is available now and you can read our review by clicking here.