The Ford Shelby GT500 Just Got the Lego Treatment

The current Ford Mustang Shelby GT500 is the most extreme machine to ever wear the iconic pony car nameplate. Designed as a tool for both the dragway and the road course, the Shelby has more in common with the likes of Europe's best sports cars than many of its fellow countrymen. For those of us unable to get the real deal, the folks at Lego have just created a new GT500 kit for the masses.

This plasticized muscle car is part of the Lego Technic series, which brings a greater focus on engineering and challenging designs than your typical Lego set.

The Shelby is composed of 544 pieces, and measures in at just over 3-inches high, 10.5-inches long, and 4.5-inches wide when finished. The general shape of the model is unmistakably American muscle, though the Mustang's front fascia proved difficult to accurately recreate out of bricks. The same can't be said out back, as the rear end is perhaps the most authentic looking section of the build.

The thing does look like a GT500, though it certainly looks like one made of Lego bricks.

Building a model that looks the part wasn't the only way Lego decided to honor the Shelby GT500. Among those 544 pieces are two pull-back motors that will allow the completed Lego GT500 to do some actual racing. As this is the modern era, the toy company has even integrated some unique virtual test tracks into its Lego Technic augmented reality app.

These tracks feature unique challenges for the model drag racer in your life to complete.

Lego states that the Ford Mustang Shelby GT500 kit is intended for builders ages nine and up, and have the kit listed as item #42138 on its website. The Shelby is £49.99, which is a lot more affordable than some of the brand's other automotive options. It's also gotta be one of the cheapest ways to get your hands on a GT500 of any kind right about now. 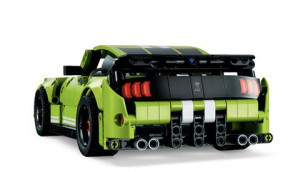 This content is created and maintained by a third party, and imported onto this page to help users provide their email addresses.

You may be able to find more information about this and similar content at piano.io